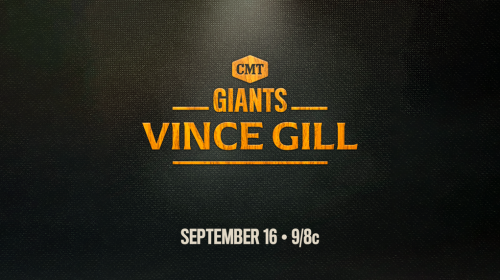 “I’m very thankful to get to honor one of my old friends, Vince Gill,” says Skaggs. “Vince has honored so many people in his life. It’s high time we’re all getting to honor him. Our friendship started back in 1976 when we played together in a Bluegrass band called Boone Creek in Lexington, Kentucky. He had so much talent it was crazy. Musically he could play any instrument that we could and more. But it was his singing that I remember most about Vince. He was a cut above even back then.”

“CMT GIANTS: Vince Gill” brings together Gill’s superstar friends, collaborators and some of the biggest names in music to honor him with performances of his most legendary hits. Performers in addition to Skaggs will include Brad Paisley, Carrie Underwood, Chris Stapleton, Luke Combs, and Maren Morris, with more to be announced. Emmylou Harris, Keith Urban, Reba McEntire, Rodney Crowell and Sting will also appear as special guests to share personal stories, reflect on their time working with Gill and speak to his forever impact on country music. The special will additionally feature an all-new sit down interview with Gill as he reflects personally on his career, his classic songwriting, musical influences and his future plans, all blended alongside rare photos, performance footage and interviews from the vault.

“I’ve been so proud of all the success he’s had, all the great songs he’s written, all the great music he’s made, and his very gracious heart for giving,” Skaggs continues. “It will be great to see him honored by so many people that he holds in high esteem. I loved him back then and still love him today. Vince, sit there and let us love and honor you, ok?”

Gill has a celebrated history with CMT including his collaboration with Sting for an episode of the iconic music franchise “CMT Crossroads” in 2011. He also appeared alongside Alison Krauss for the “CMT Cross Country” series in 2006. Most recently, he appeared at the 2019 “CMT Artists of the Year” ceremony to present friend Reba McEntire with her special “Artist of a Lifetime” honor.

About Ricky Skaggs
Earning 12 #1 hit singles, 15 GRAMMY® Awards, 13 IBMA Awards, nine ACM Awards, eight CMA Awards (including Entertainer of the Year), two Dove Awards, the ASCAP Founders Award, three honorary Doctorate degrees, inductions into the Country Music Hall of Fame, IBMA Bluegrass Music Hall of Fame, National Fiddler Hall of Fame, Musicians Hall of Fame, and GMA Gospel Music Hall of Fame, the 2013 Artist-In-Residence at the Country Music Hall of Fame® and Museum, an Americana Music Association Lifetime Achievement Award in the Instrumentalist category along with countless other awards, Ricky Skaggs is truly a pioneer of Bluegrass and Country music. Since he began playing music over 60 years ago, Skaggs has released more than 30 albums and has performed thousands of live shows. He started his own record label, Skaggs Family Records, in 1997 and has since released 12 consecutive GRAMMY®-nominated albums. His latest release, Hearts Like Ours, with his wife, celebrated artist Sharon White of The Whites features the couple dueting on handpicked country love songs. And the Grand Ole Opry member has released his first-ever autobiography, “Kentucky Traveler.” The book details the life and times of Skaggs and provides a descriptive history of Country and Bluegrass music, as told by the master himself. In addition to his regular touring schedule with his band, Kentucky Thunder, he has added country tour dates as he plugs in and plays full shows of his chart-topping hits. Skaggs was a 2020 recipient of the National Medal of Arts, the highest award given to artists and arts patrons by the United States government.