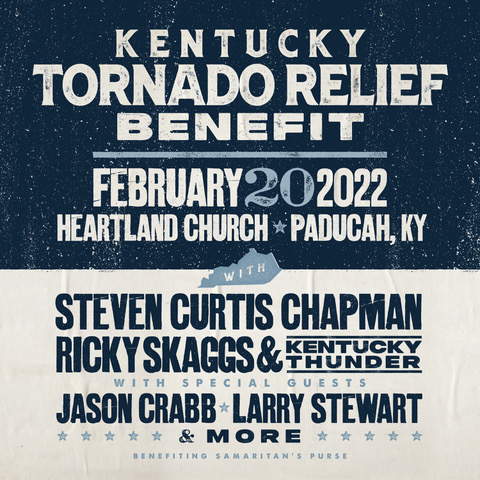 MAKE YOUR PLANS NOW TO ATTEND THIS VERY SPECIAL ONE NIGHT ONLY CONCERT EVENT!

“Bring your friends and help all you can, as they really need us right now.”–Ricky Skaggs

Devastated by the damage from the December 10th tornado in Kentucky, Ricky Skaggs and Steven Curtis Chapman have organized a benefit concert on Sunday, February 20th at 7:00pm CT at Heartland Church in Chapman’s hometown of Paducah, Kentucky. Skaggs and Chapman enlisted friends, fellow artists Jason Crabb, Larry Stewart and more for the lineup.

For TICKETS or to make a DONATION: https://www.kytornadobenefit.com/

In a career that has spanned over 30 years, Steven Curtis Chapman is the most awarded artist in Christian music history with 59 Gospel Music Association Dove Awards, five GRAMMYs, an American Music Award, 49 No. 1 singles, selling more than eleven million albums and with ten RIAA-certified gold or platinum albums to his credit. He has been on “Good Morning America,” “CBS Sunday Morning,” CNN, MSNBC, “60 Minutes,” E! Entertainment, “The Today Show,” “Fox & Friends,” “CBS This Morning” and “The Tonight Show,” Glenn Beck’s “The Blaze,” along with appearing in the pages of People, Billboard, Parents Magazine and more. A vocal supporter of adoption, Chapman, along with his wife Mary Beth, founded Show Hope in 2003, a nonprofit organization that helps restore the hope of a family to orphans.

Earning 12 #1 hit singles, 15 GRAMMY® Awards, 13 IBMA Awards, nine ACM Awards, eight CMA Awards (including Entertainer of the Year), along with six Hall of Fame inductions, Ricky Skaggs is truly a pioneer of Bluegrass and Country music. Since he began playing music over 60 years ago, Skaggs has released more than 30 albums and has performed thousands of live shows. He started his own record label, Skaggs Family Records, in 1997 and released 12 consecutive GRAMMY®-nominated albums.  The Grand Ole Opry member also penned his first-ever autobiography, “Kentucky Traveler.” The book details the life and times of Skaggs and provides a descriptive history of Country and Bluegrass music, as told by the master himself. As an in demand musician, he is regularly on tour with his band, Kentucky Thunder. In 2020, Skaggs received the National Medal of Arts, the highest award given to artists and arts patrons by the United States government.

One of Gospel and Christian music’s most iconic voices, Kentucky-born Jason Crabb has been honored with two GRAMMY® Awards and 22 GMA Dove Awards, the latter including nods for Artist, Male Vocalist and Song of the Year. He is the youngest member inducted into the Kentucky Music Hall of Fame, and his hometown of Beaver Dam, Kentucky, has paid tribute with a street in his name. Since his first solo release in 2009, he has performed on many of the world’s most prestigious stages, such as Carnegie Hall, the Grand Ole Opry, the Brooklyn Tabernacle and Billy Graham’s final crusade. Crabb’s electrifying stage presence, powerhouse vocals and magnetic personality have endeared him to millions around the world through extensive personal appearances, media coverage and social media, including over 20 million views on YouTube.

When Larry Stewart first moved to Nashville, he had his share of menial Music Row jobs, from a stock clerk at the Country Music Hall of Fame and mowing grass at BMI to running tape copies at MCA Music. It was while working at MCA though that longtime family friend Jerry Crutchfield coaxed Stewart into singing a few demos for his brother Jan. The word quickly spread about the young man with a voice that mixed strength and intimacy with an honest raggedness that made him real. Suddenly, Stewart was an in-demand demo singer, and it wasn’t long until destiny came knocking in the form of Tim DuBois who was putting together a band called Restless Heart. To date, Restless Heart is one of the most successful groups in country music history. The band has placed over 25 singles on the charts with six consecutive #1 hits, recorded four albums certified Gold by the RIAA and have won a wide range of awards including the Academy of Country Music’s “Top Vocal Group.” Today, Stewart tours regularly with The Frontmen (consisting of Stewart, Richie McDonald, formerly of Lonestar, and Tim Rushlow, formerly of Little Texas).

For TICKETS or to make a DONATION: https://www.kytornadobenefit.com/
All proceeds will benefit victims of the tornado via Samaritan’s Purse.

From our family to yours,

THANK YOU for your generous hearts!