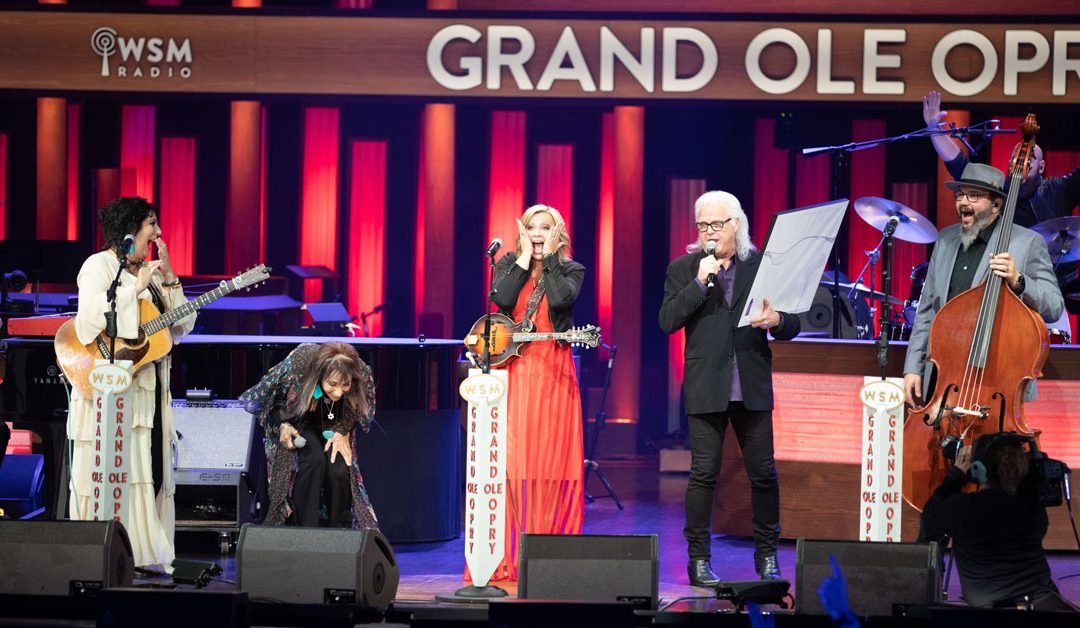 NASHVILLE, Tenn. – (August 10, 2021) –  The multi-Grammy-nominated Dove Award-winning The Isaacs, members of the Gospel Music Hall of Fame, were surprised on stage at the Grand Ole Opry tonight by Opry member Ricky Skaggs with an invitation to become official Opry members. The group will be formally inducted into the Opry family on Tuesday, September 14.

Isaacs members Becky, Ben, Lily, and Sonya were marking the release of their new album The American Face when Skaggs approached them on stage with framed artwork of the album. Reading an inscription in the framed material, Skaggs said, “PRESENTED TO THE ISAACS ON AUGUST 10, 2021 TO COMMEMORATE THE RELEASE OF THE NEW ALBUM ‘THE AMERICAN FACE’ AND TO CELEBRATE YOUR INVITATION TO BECOME OFFICIAL MEMBERS OF THE GRAND OLE OPRY.” Then he followed with, “Do you say yes?”

“Yes, of course we will marry you!,” Sonya said laughing. “I’m crying my lashes off. I’m celebrating 50 years of singing and performing music. This is the American dream,” shared Mom Lily to which Ben exclaimed, “I’m shaking so bad I can hardly talk but I’m crying my lashes off too.” And Becky closed with, “We will take the Opry everywhere we go and hope to make them proud.” The group then performed the title track off their new album.

“The Isaacs are musical treasures. They are family,” said Opry Vice President and Executive Producer Dan Rogers. “I think, ‘man, is our audience lucky tonight’ every single time they take our stage. We’re honored they love the Opry like they do, and I am excited about the prospect of them delivering their powerful songs from the Opry circle for years to come.”

About The Isaacs
The Isaacs, a multi-award-winning family group who began singing 35 years ago are based out of Hendersonville, TN. The vocalists are mother Lily Isaacs, and siblings Ben Isaacs, Sonya Isaacs Yeary and Rebecca Isaacs Bowman.

Playing their own acoustic instruments and joined by other band members, The Isaacs have a unique style that blends tight, family harmony with contemporary acoustic instrumentation that appeals to a variety of audiences. Their musical style has been influenced by many  genres of music including bluegrass, rhythm and blues, folk, and country, contemporary, acoustic, and southern gospel.

They perform frequently at the Grand Ole Opry, are active members on the Gaither Homecoming Videos and Concert Series and travel internationally throughout the year to perform to welcoming fans in countries including South Africa, Norway, Holland, Scotland, Ireland ,Israel, Canada and many more. Concert venues include civic centers, auditoriums, arenas, fair grounds, parks, churches, and other locations. They have been nominated at and performed on the Dove Awards, IBMA (International Bluegrass Music Association) and NQC (National Quartet Convention) Awards, the ICMA Awards (Inspirational Christian Country).  Other notable performances include CMA Fan Fest, Carnegie Hall, and many professional sporting events, including a Cincinnati Bengal’s football game, Nashville Predators Hockey games and an Astros/ Braves baseball game.

The Isaacs have won Dove Awards in various categories and have had several Grammy nominations in their career.  They feel blessed to be able to travel and spread the message of hope and grace through song and story.

About the Grand Ole Opry
Opry presents the best in country music live every week from Nashville, Tenn.  The Opry can be heard at opry.com and wsmonline.com, Opry and WSM mobile apps, SiriusXM, and its flagship home, 650 AM-WSM, with Saturday night shows seen on the Circle Network. The Grand Ole Opry is owned by Ryman Hospitality Properties (NYSE: RHP).  For more information, visit opry.com.