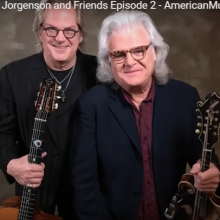 Check out episode 2 of The Guitarist – John Jorgenson and Friends. This time John sits down to talk and jam with Ricky Skaggs and Sam Bush. The acoustic jamming in the episode is fierce. Any fan of acoustic music, gypsy jazz, Django, bluegrass or the mandolin need to check this out. There is a special appearence of Jethro Burn’s vintage Gibson Mandolin.

Oakland, New Jersey’s AmericanMusical.com is partnering with K-S Productions to create a one of kind musical series around the great John Jorgensen. Join John as he discusses music, musical history, gear and all things guitars and guitar playing with some of the most influential artists in the world including; Brad Paisley, Peter Frampton, Joe Bonamassa, Ricky Skaggs, Tommy Emanuel, Sam Bush, and others. This is not a how-to but rather a deep dive into the influences of the artist and what created their unique sounds from guitar types to favorite amps.

John Jorgenson, born July 6, 1956, in Madison, Wisconsin, is perhaps best known for his guitar work with bands such as the Desert Rose Band and The Hellecasters. Jorgenson is also proficient in the mandolin, mandocello, Dobro, pedal steel, piano, upright bass, clarinet, bassoon, and saxophone. John Jorgenson, known for his blistering guitar and mandolin licks and mastery of a broad musical palette, has earned a reputation as a world-class musician, as evidenced by his collaborations with Earl Scruggs, Bonnie Raitt, Elton John, Luciano Pavarotti, Bob Dylan, and many others.

The series will be aired every month on https://www.americanmusical.com/content–name-The-Guitarist-with-John-Jorgenson