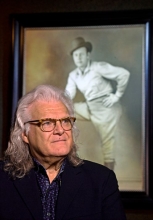 Bill Monroe, the Father of Bluegrass, towered over the tow-haired first-grader he’d just pulled on stage in Martha, Kentucky. The kid wasn’t supposed to be part of the show, but the audience kept shouting for Monroe to let “little Ricky Skaggs” play. Monroe unstrapped his mandolin and hung it on the boy, then asked what he wanted to sing.

Skaggs, gingerly perched more than half a century later on a pew from the famed Ryman Auditorium that he keeps in his Hendersonville recording studio, remembers how the mandolin felt as bulky as a guitar around his slight frame. He also remembers how that night changed his life.

During a ceremony last month for his induction into the Country Music Hall of Fame, Skaggs played Monroe’s mandolin again. It was a full-circle moment for the singer who stepped back from country music for 20 years to honor Monroe’s bluegrass legacy. Today, Skaggs is firmly entrenched in both genres and will be honored during the 52nd CMA Awards, which will air live from Nashville’s Bridgestone Arena at 7 p.m. Nov. 14 on ABC.

“When Ricky Skaggs came onto the country music scene, he was like the white knight riding into battle to save the day,” said author and country historian Robert Oermann. “It was very pop.”

‘Those acts of kindness … had done something to my spirit’

Skaggs’ country music journey started before he met Monroe, his path cemented with his mother on the back porch of his family’s quaint Kentucky home. She washed the family’s clothes with a wringer washing machine and sang gospel hymns and George Jones songs as she turned the crank.

“I tell people that my mother sung so hard and so loud and her voice was so sharp that she’d spay cats in four counties,” Skaggs said with a smile.

At 5 years old, Skaggs learned to play the mandolin. The next year, he added guitar and memorized the chords by watching his father’s hands on the instrument’s neck and then emulating what he did while looking in the mirror.

In 1961 when Skaggs was 7 years old, his family moved from Kentucky to Goodlettsville, right outside of Nashville. His dad, Hobert, thought that if they moved to Music City, his son might be able to sing on the Grand Ole Opry, a sure ticket to success. The elder Skaggs made friends with a backstage security guard who agreed to let him sneak the boy in to observe. Skaggs brought his mandolin and leaned against the wall to play as the Opry’s members and guests wandered through. Earl Scruggs heard him sing and invited Skaggs to audition for Flatt & Scruggs’ television show. Skaggs performed “Foggy Mountain Special” and “Ruby,” the same song he’d played the year before on Monroe’s mandolin.

The Skaggs family moved back to Kentucky about three years later and went to see bluegrass duo the Stanley Brothers in nearby Olive Hill. Again, Skaggs found himself on stage.

“That was three heroes, three artists who were foundational to bluegrass music,” Skaggs said. “The foundation of the music that I make. But just the fact they were so, so kind to me. Those acts of kindness, whether I realized it or not, had done something to my spirit and my mind.”

A contract written on a napkin launched Skaggs’ solo career

By the time he was 16 years old, Skaggs was traveling with Ralph Stanley to festivals, his star continuing to rise in the bluegrass world. At 18, he got married and left the rolling hills of Kentucky for Washington, D.C. He briefly took a job at a power company before refocusing his full attention on music. He forged relationships with the Country Gentlemen and Emmylou Harris, who was Skaggs’ bridge to country music in the 1980s.

Emmylou Harris and Ricky Skaggs hug after performing during the taping of “A Country Music Celebration” honoring the CMA’s 35th anniversary at the Grand Ole Opry House on Jan. 13, 1993. Skaggs once toured as part of Harris’ band before signing his first major label country recording contract. (Photo: Rex Perry / The Tennessean)

Skaggs toured as part of her band, but when Harris took time off to be with her new baby, he recorded a few more songs of his own. On a flight from Los Angeles to Nashville, a flight attendant upgraded him to first class. He tossed his things under the seat and plopped down beside Jim Massa, then an executive with EMI. By the end of the flight, Skaggs had played his solo music for Massa, who told him to bring his songs to Capitol Records. Capitol didn’t sign Skaggs, but it referred him to Rick Blackburn at CBS.

“That’s how it happened,” Skaggs said, shifting on the church pew. “I got signed with CBS. The flight attendant, Jim Massa being in the seat, you can’t make this up. If God ain’t in this, I don’t know.”

Skaggs’ country career produced hits including “Heartbroke,” “Honey (Open that Door),” “Highway 40 Blues” and his first chart-topper, “Crying My Heart Out Over You,” which he says changed everything.

“I was signing autographs driving through McDonald’s and signing baby diapers at Kroger,” Skaggs said with a smile.

About that time, John Travolta’s film “Urban Cowboy” was peaking in popularity. Under its influence, country music was trending toward pop and traditionalism was struggling for recognition.

Garth Brooks, who helped induct Skaggs into the Country Music Hall of Fame, credits the Kentucky native for paving the way for Randy Travis and the traditionalist movement, which made room for himself and others, including Alan Jackson and Clint Black, who broke through in the early 1990s.

“There was a cowboy out of Texas holding the fort down and a cowgirl out of Oklahoma holding the fort down, and they needed help,” Brooks said, referencing George Strait and Reba McEntire in the early ‘80s. “Here came a kid playing country and bluegrass music out of Kentucky. And for me, I think George, Reba and Ricky held the fort down long enough for (traditional country to make a comeback.)”

A promise kept, a return to country music

Country music was still too pop for Skaggs. He didn’t like the slick sounds and massive tours.

“Mr. Monroe kicked the doors open for all of us,” Skaggs said. “I made him a promise that I would tell people what a rocking cat he was. I’ve done that.”

Skaggs played his first full country show in Nashville in 20 years in September 2017. Just a few months later, the Country Music Association’s Sarah Trahern met Skaggs at the Grand Ole Opry to tell him he was going to be inducted into the Country Music Hall of Fame.

“I never came here with intentions of being a Hall of Fame member,” Skaggs said, remembering he “squalled” when Trahern extended the offer. “That was the farthest thing from my mind. I thought that was for old people who had died and gone on.”

Initially, the invitation made him feel guilty because the Stanley Brothers aren’t yet members. But the more he thought about it, he said he realized that with his induction, they would be.

“Their music lives in the heart,” Skaggs said. “Their music has been the foundation of the music that I make. That was a blanket of peace that came over me. Their names may not be there, but they (went in) with me.”

Reach Cindy Watts at ciwatts@tennessean.com or 615-664-2227 and on Twitter @CindyNWatts.