Ricky Skaggs made the ‘music in my head and heart.’ He’s entering the IBMA Hall of Fame. 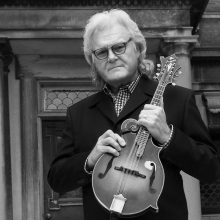 Congratulate Ricky Skaggs on making the Hall of Fame, and you might get the unexpected response: “Which one?”

Skaggs is not trying to be funny or arrogant — it’s hard to keep track. Not only is he being inducted into the International Bluegrass Music Association’s Hall of Fame at Thursday night’s IBMA Awards, he’ll also go into the Country Music Hall of Fame next month.

“Well, you never know when those things will ever come, or if they do,” said Skaggs, 64, calling from Nashville. “But I was honored to get the call for both. It’s kinda wild. (Grand Ole Opry announcer) Eddie Stubbs says it’s a record that’s never been done, and he’d be the man to know.

Joining him in the Hall of Fame this year are Paul Williams, who came to fame as one of the Sunny Mountain Boys with fellow Hall of Famers Jimmy Martin and J.D. Crowe; and songwriters Tom T. & Dixie Hall.

On the eve of his first Hall of Fame induction, here are six things to know about Skaggs. He’ll perform at Saturday night’s Wide Open Bluegrass show at Red Hat Amphitheater.

1. Skaggs has important ties to the Triangle.

In many ways, Skaggs was “The Franchise” for Durham-based Sugar Hill Records, and not just because he appeared on the label’s very first release, 1978’s “One Way Track” by Boone Creek. Sugar Hill was a one-man operation then, run out of founder Barry Poss’ Durham apartment, and Skaggs earned the label’s first chart hits and gold record.

“Barry gave me a lot of freedom to make the music in my head and heart,” Skaggs said. “I’ve always been thankful for Barry’s willingness to just let me do the music and send him the recordings. He had a lot of trust in me, which I didn’t really get at the time. Nowadays an unknown artist could never do anything like that.”

For his part, Poss gives Skaggs credit for putting his label on the map.

“Ricky symbolized why I started Sugar Hill in the first place,” Poss said. “I’d visit old-time artists who had made records in the 1920s and ’30s, and I got interested in their kids and grandkids — who had one foot in the traditional world but were young enough to be influenced by rock or jazz. That tension made for an exciting kind of new music. Nowadays it’s called Americana.”

2. Skaggs was one of the first and biggest bluegrass crossover acts of modern times.

The Kentucky-born Skaggs emerged as a teen prodigy, playing with Bill Monroe, Country Gentlemen and other bluegrass elders. On his own, he integrated a bluegrass sound and sensibility into country music more effectively than anyone else ever had.

“I felt like if I took the roots of the bluegrass I’d grown up with and mixed mandolin, banjo and fiddle as prominently as the electric instruments, I’d really have something,” Skaggs said. “I did not want to sidestep my bluegrass roots. I wanted the mandolin solo on ‘Highway 40 Blues’ to pop just as loud as the steel guitar.

“Music Row people in Nashville always felt like bluegrass wasn’t really commercial,” he added. “But I also know there’s something about the sound of mandolin, fiddle and banjo that draws people’s attention. I’d hear Toyota, American Express and other huge corporations using bluegrass instruments in their ads, and if that’s not commercial, tell me what is?”

3. Country radio turned out to be surprisingly receptive.

Skaggs also brought a youthful energy, attitude and voice to the table — “I was very immature in this days,” he quipped — and it was just the ticket, especially in Texas.

“‘I’ll Take the Blame’ stayed No. 1 for six weeks on this Houston station where the program director loved the sound,” Skaggs said. “It didn’t hurt that Emmylou (Harris) was singing tenor on that one. It was an old Stanley Brothers song and people went crazy dancing to it. And if you get people dancing in Texas, that’s a hit.”

4. Skaggs was tight with North Carolina legends Doc and Earl.

This was nowhere more evident than on “The Three Pickers,” a 2003 album featuring Skaggs alongside his fellow Bluegrass Hall of Famers Doc Watson (class of 2000) and Earl Scruggs (class of 1991). Among the album’s many highlights is their version of “Don’t Let Your Deal Go Down Blues,” the 1925 proto-bluegrass hit by North Carolina pioneer Charlie Poole.

“Doc was a deep man,” Skaggs said. “He loved Jesus, he was assured and I am, too, so we talked a lot about that. He had a force and a strength about him, felt like he could do anything anyone else could but see. And if he could not see naturally, he could see in his heart. He could tell right quick what a person was like just talking to them a little.”

5. He was buddies with Ray Charles, too.

“First time he and I met, we shook hands, and then he rubbed his left hand up and down my arm,” Skaggs recalled. “‘Oh, you a tall man,’ he said, and that was how we connected. He told me how much he loved bluegrass, because he could hear the bluegrass in my music. He was all soul. If you had soul, you had his heart.

“He and I did a song together and he coached me on the vocal,” he continued. “I’d sing, trying to be nice and in-tune, and Ray would say, ‘OK, now, one more time, loosen it up a little.’ I tried again two or three times and he finally said, ‘Honey, you just ain’t convinced me yet.’ Finally I did and he said, ‘Oh, you got me now!’ It was a time I’ll never forget.”

6. Skaggs will perform this week, but won’t play

“I just had shoulder surgery and I’m not able to play for 12 weeks,” Skaggs said. “Which is too bad, but that’s OK. Andy Leftwich will sit in for me while I sing, and Patty Loveless will be special guest on three or four songs at the Red Hat Amphiteater.”

And who will do the honors for inducting him into the bluegrass Hall of Fame?

Ricky Skaggs will be inducted into the IBMA Hall of Fame during the IBMA Awards, 7:30 p.m. Thursday at Memorial Auditorium. Tickets are $62-$112 at Ticketmaster.com.