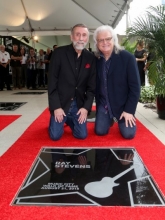 “When I look at all the names on the Walk of Fame, it’s truly humbling to see mine included there,” says Stevens. “Thank you Nashville.”

Stevens, Lee, Seely and Folds received the 81st, 82nd, 83rd and 84th stars on the Walk of Fame. The four were recognized for their significant contributions to preserving the musical heritage of Nashville and for contributing to the world through song or other industry collaboration.