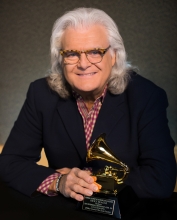 Exclusive Interview Features Music Legend Dishing on the Legacy of Bill Monroe
Nashville, Tenn. (January 17, 2018) — During an exclusive interview, Reverb recently caught up with 15X GRAMMY® Award-winning Country and Bluegrass legend Ricky Skaggs at his Hendersonville, Tennessee recording studio.
Skaggs sat down with the widely-popular music gear website to discuss the late Bill Monroe’s unique performance style and the impact the “Father of Bluegrass” left on the genre, as well as Country music. Watch the full discussion HERE.
Skaggs has been quite the buzz around Nashville as of late. Last May, he was spotlighted during a Special Program at the Country Music Hall of Fame and Museum, highlighting his 50+ years as an entertainer. That same month, he celebrated 35 years as a member of the Grand Ole Opry. Later in the fall, he returned to his country roots when he performed all of his classic chart-topping songs before a sold out crowd at the Nashville Palace. The concert marked Skaggs’ first full-blown country show in Music City in 20 years.
Following the concert, Rolling Stone Country raved: “The playing, as one would expect, was exceptional, and his mountain tenor sounded just as pure as it did 30 years ago. It was both a joyful stroll down memory lane and a reaffirmation of Skaggs’ permanent place in the country and roots pantheon.”
The icing on the cake was Skaggs’ 15th GRAMMY® win last year when he took home the gold for his producer credit on Hillary Scott & The Scott Family‘s Contemporary Christian album, Love Remains. For a full listing of Skaggs’ GRAMMY® wins, click HERE.
About Ricky Skaggs
Earning 12 #1 hit singles, 15 GRAMMY® Awards, 12 IBMA Awards, nine ACM Awards, eight CMA Awards (including Entertainer of the Year), two Dove Awards, the ASCAP Founders Award, three honorary Doctorate degrees, inductions into the Musicians Hall of Fame and GMA Gospel Music Hall of Fame, the 2013 Artist-In-Residence at the Country Music Hall of Fame and Museum, an Americana Music Association Lifetime Achievement Award in the Instrumentalist category along with countless other awards, Ricky Skaggs is truly a pioneer of Bluegrass and Country music. Since he began playing music more than 50 years ago, Skaggs has released more than 30 albums and has performed thousands of live shows. He started his own record label, Skaggs Family Records, in 1997 and has since released 12 consecutive GRAMMY®-nominated albums. His latest release, Hearts Like Ours, with his wife, celebrated artist Sharon White of The Whites features the couple dueting on handpicked country love songs. And the Grand Ole Opry member has released his first-ever autobiography, “Kentucky Traveler.” The book details the life and times of Skaggs and provides a descriptive history of Country and Bluegrass music, as told by the master himself. In addition to his regular touring schedule with his band, Kentucky Thunder, he has performed a string of dates with his better half Sharon White along with guitar legend Ry Cooder on the critically-acclaimed “Cooder-White-Skaggs” tour and from time to time hits the road with versatile singer/songwriter and pianist Bruce Hornsby on another critically-acclaimed tour, “Ricky Skaggs & Bruce Hornsby with Kentucky Thunder.” Most recently, Skaggs has added Country tour dates as he plugs in and plays full shows of his chart-topping hits.
For more information on Ricky Skaggs, visit rickyskaggs.com.
***Suggested Tweet:
@reverb.com catches up with 15X GRAMMY winner @RickySkaggs
# # #
Media Contact for Ricky Skaggs:
Absolute Publicity, Inc.
Don Murry Grubbs / (615) 275-8380
don@absolutepublicity.com