RICKY SKAGGS TO APPEAR AND PERFORM ON TBN’S HUCKABEE 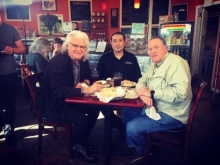 Country music and bluegrass legend Ricky Skaggs will appear on this weekend’s edition of Huckabee on the Trinity Broadcasting Network (TBN).

On the national television show, Skaggs and Governor Mike Huckabee will dine at Café Rakka, a popular Mediterranean restaurant (and one of Skaggs’ personal favorites), located in Hendersonville, Tennessee. The 15X GRAMMY® winner will also perform his #1 hit country song, “Heartbroke,” with Huckabee backing him on bass guitar. In addition, Skaggs and his wife, Sharon White (of country music group The Whites), will perform “Hold On Tight,” a tune from their 2014 duets album, Hearts Like Ours.