RICKY SKAGGS & KENTUCKY THUNDER TO PERFORM AT BLUEGRASS NIGHTS AT THE RYMAN ON 7/27! 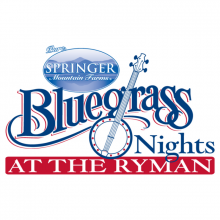 Ricky Skaggs’ love affair with music is life-long. A 15-time Grammy winner, Skaggs earned his first paycheck at age seven when he performed with bluegrass legends Flatt & Scruggs on their popular television show. From there, his success grew from playing in Emmylou Harris’ band to becoming the youngest person at the time to receive an invitation to join the Grand Ole Opry in 1982. Under his own label, Skaggs Family Records, Ricky Skaggs has released 12 consecutive Grammy-nominated albums, with eight going on to earn the revered award.
The inaugural Bluegrass Nights at the Ryman series took place in 1994 at the then newly renovated Ryman Auditorium. The first show featured the father of bluegrass himself, Bill Monroe, and the angelic Alison Krauss. Over the last twenty plus years, the series has become a Nashville summertime tradition as it regularly presents the biggest names in bluegrass on the very stage where the genre was born back in 1945.
Ricky Skaggs & Kentucky Thunder close out the last night of the series on Thursday, July 27. Get your tickets now HERE!
ALL SHOWS BEGIN AT 7:30 PM AND ARE PRECEDED BY 650 AM WSM’S FREE SHOWCASE, PICKIN’ ON THE PLAZA, FEATURING REGIONAL BLUEGRASS BANDS FROM 6:00 PM TO 6:45 PM ON THE RYMAN PLAZA.