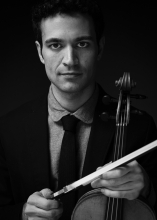 Ricky Skaggs is proud to introduce Mike Barnett, the newest member of his band, Kentucky Thunder. At the beginning of 2017, Mike will be replacing fiddle virtuoso Andy Leftwich, who has been with Kentucky Thunder since 2001, picking up many awards and accolades during his tenure with the band playing the fiddle.

About Ricky Skaggs and Kentucky Thunder, Andy says, “I want the best for Ricky, and I want the best for that band. We’ve always had a great band, but I feel really close to this bunch of guys. The shows with Bruce Hornsby were out of this world, and a lot of fun. I’ve never played with anyone who plays with the heart and spirit than he does. Even at 61 years old, he’s out there on stage acting like a 20 year old. It will be hard to leave behind.”

On his future, Andy continues, “My wife and I have been able to be part of some really great meetings with some churches around the country. I’m definitely not quitting, I’ll keep picking. But I’m looking to be more a part of the ministry. I’m excited about the possibilities of doing more of that.”

After 15 years of incredibly talented musicianship, we are sad to see Andy leave Ricky’s band, Kentucky Thunder. We know he will be an incredible asset wherever he may go and wish him many blessings and all the best for the future.

The newest member of Kentucky Thunder, Mike Barnett, was born and raised in Nashville, Tenn. and has a special place in his heart for bluegrass and country music. At age 14, Mike recorded his first CD, Lost Indian, a collection of traditional fiddle classics. Shortly after, he was invited to teach alongside fiddle greats Vassar Clemens, Buddy Spicher, and Bobby Hicks at the Vanderbilt Blair School of Music International Fiddle Camp. Upon his move from Tennessee to Massachusetts with his family, Mike got to know many rising acoustic stars including bassist Sam Grisman and David Grisman while at Berklee College of Music. In 2009, Mike joined the David Grisman Quintet (DGQ) to form a sextet. He has also toured with bluegrass icon Jesse McReynolds and the Virginia Boys, banjo player Tony Trischka, the Gordon Stone Trio, Northern Lights–one of New England’s renowned folk bands–along with influential mandolinist Joe Walsh, the band The Deadly Gentlemen, guitarist Bryan Sutton, as well as sharing the stage with highly innovative banjoists Bela Fleck, comedian Steve Martin, and Greg Liszt. Highly awarded, Mike was the recipient of the 2007 Daniel Pearl Memorial Violin created by Jonathan Cooper and awarded at the Mark O’Connor String Conference. He has recorded with numerous musicians as well as on his own recordings, with the most recent being One Song Romance, a compilation of all original music.

With much excitement, we welcome Mike as the newest member of Kentucky Thunder.