RICKY SKAGGS AND OTHERS INDUCTED INTO THE MUSICIANS HALL OF FAME OCT. 26 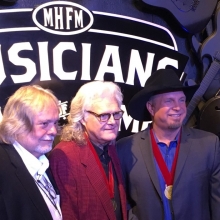 Ricky Skaggs along with other musicians, engineers and producers was inducted into the Musicians Hall of Fame on Wed., Oct. 26 at Nashville’s Municipal Auditorium.
At the event, a video history chronicling the life and music of Ricky Skaggs was shown and he played three songs during the celebration for the crowd. Ricky performed “Heartbroke,” one of his #1 country hits, the Christian anthem “Somebody’s Praying” with the writer of the song, John Elliott, who accompanied Ricky on the piano, and Bruce Hornsby joined Ricky on stage with members of Kentucky Thunder to play the bluegrass version of “The Way It Is,” off of their recent collaborative album, Cluck Ol’ Hen.
Other members that were also inducted into the Musicians Hall of Fame that night include Garth Brooks and his studio backing band, the G-Men, the late Jerry Reed, Don Felder, the Sigma Sound Studio Rhythm Section, producer Allen Reynolds, and engineers Lou Bradley, Mark Miller, Ron “Snake” Reynolds, and Joe Tarsia.
Click on the link below for more:
https://www.musicianshalloffame.com/wp-content/uploads/2016/09/Musicians-Hall-of-Fame-inducts-Class-of-2016-WSMV-Channel-4.mp4