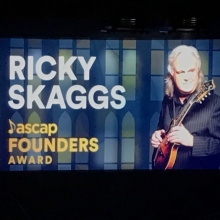 The American Society of Composers, Authors and Publishers (ASCAP)hosted its 54th Annual ASCAP Country Music Awards on Monday, October 31 at Ryman Auditorium in downtown Nashville. The writers and publishers of country music’s most-performed songs of 2015 were honored before an audience of distinguished Nashville songwriters, top country stars and music industry leaders.
Ricky Skaggs, a pioneer of bluegrass and country music with 14 Grammys and more than 30 albums to his credit, was honored in song before being presented with the esteemed ASCAP Founders Award. Thank you to the following artists that came to perform Ricky’s songs–Garth Brooks, Sam Bush, Alison Krauss, Suzanne & Sidney Cox of the Cox Family, Jamey Johnston, Peter Frampton and Gordon Kennedy. Each and every performance was simply amazing!
Garth Brooks with Sam Bush performed “Highway 40 Blues;” Alison Krauss, with Jamey Johnson and Suzanne & Sidney Cox of the Cox Family, performed “Waitin’ for the Sun to Shine;” and Peter Frampton and Gordon Kennedy performed “My Cup Runneth Over.” The ASCAP Founders Award is given to songwriters and composers who have made pioneering contributions to music by inspiring and influencing their fellow music creators.
For more information, please read the Associated Press article below:

Ricky Skaggs, Chris Stapleton honored by ASCAP
By KRISTIN M. HALL
The Associated Press
NASHVILLE, Tenn. —
Grammy-winning bluegrass and country artist Ricky Skaggs and bluegrass singer-turned-country star Chris Stapleton were honored at the ASCAP Country Music Awards on Monday night.
The performing rights organization honored their top country writers and singers during an awards show on Halloween night at the Ryman Auditorium featuring performances by Garth Brooks, Kelsea Ballerini and Trace Adkins.
A renowned mandolin player who has excelled at bluegrass, gospel and country music, Skaggs was presented with the ASCAP Founders Award and recognized for his pioneering contributions to music.
“I could have been born anywhere in the world, but God had a purpose for me to be born in Eastern Kentucky to hear the sounds of the mountains and the Stanley Brothers and Flatt and Scruggs and Bill Monroe,” Skaggs said.
Brooks performed “Highway 40 Blues,” which was a No. 1 country hit for Skaggs, while Alison Krauss and Jamey Johnson performed “Waitin’ for the Sun to Shine,” and Peter Frampton performed “My Cup Runneth Over.”
Stapleton, who was a member of the bluegrass band The SteelDrivers before starting his solo career as a country songwriter and singer, was given the ASCAP Vanguard Award.
Stapleton racked up armfuls of music awards, including two Grammys, since his debut album “Traveller” came out in 2015, and he’s nominated for five Country Music Association Awards on Wednesday.
“I don’t know what to say about everything that has happened in the last year and half,” he said.
Stapleton gave a shout out to Skaggs, since both are from Kentucky, and talked about once trying to get Skaggs to autograph his mandolin.
“When I found out you could have a job being a songwriter, I thought, ‘Man, that’s the greatest job in the world,'” Stapleton said. “I gotta figure how to do it.”
Songwriter Ashley Gorley was named the country music songwriter of the year for a third time in a row for writing seven chart-topping country songs in 2015, including hits for Luke Bryan and Jason Aldean.
Gorley, a passionate fan of the University of Kentucky Wildcats basketball team, was surprised by an appearance by Wildcats coach John Calipari.
“Stay a Little Longer” performed by Brothers Osborne was named song of the year.