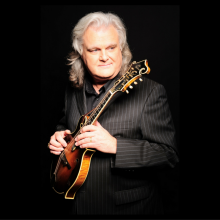 Nashville, Tenn., September 1, 2016: ASCAP, the American Society of Composers, Authors and Publishers, will present acclaimed bluegrass and country music songwriter-artist and Grand Ole Opry member Ricky Skaggs with its prestigious Founders Award at the 54th annual ASCAP Country Music Awards. The exclusive, invitation-only gala, which celebrates the songwriters and publishers of ASCAP’s most performed country songs of 2015, will take place at the historic Ryman Auditorium in downtown Nashville, Tennessee on October 31st.

ASCAP President Paul Williams said: “For more than four decades Ricky Skaggs has been a musical force in bluegrass and country music. His incredible gifts as a musician combined with his boundless creativity and energy continue to fuel a passion for American roots music around the world. A national treasure, he has influenced generations of fellow music creators and we are honored to present him with the ASCAP Founders Award.”

The Founders Award is one of ASCAP’s highest honors and is presented to songwriters and composers who have made pioneering contributions to music by inspiring and influencing their fellow music creators. Each recipient is a musical innovator who possesses a unique style of creative genius, which will enrich generations to come. Previous recipients include George Strait, Alan Jackson, Jackson Browne, Emmylou Harris, Garth Brooks, Bob Dylan, Tom Petty, Melissa Etheridge and Neil Young.

Ricky Skaggs is a renowned pioneer of bluegrass and country music, having earned 12 #1 singles, 14 Grammy Awards, 11 IBMA Awards, nine ACM Awards, eight CMA Awards (including Entertainer of the Year), two Dove Awards, three honorary Doctorate degrees, a GMA Gospel Music Hall of Fame induction, the Country Music Hall of Fame and Museum’s 2013 Artist-In-Residence, and an Americana Music Association Lifetime Achievement Award, along with numerous other accolades. Since he began playing music more than 50 years ago, Skaggs has released more than 30 albums and has performed thousands of live shows. He started his own record label, Skaggs Family Records, in 1997 and has since released 12 consecutive Grammy-nominated albums. His newest release, Hearts Like Ours, with his wife, celebrated artist Sharon White of The Whites, features the couple performing duets of handpicked country love songs. The Grand Ole Opry member has also released his first-ever autobiography, “Kentucky Traveler,” which details the life and times of Skaggs and provides a descriptive history of country and bluegrass music. In addition to his regular touring schedule with his band, Kentucky Thunder, he has recently performed a string of dates with Sharon White and guitar legend Ry Cooder, and continues to tour with versatile singer-songwriter and pianist Bruce Hornsby.

The 54th annual ASCAP Country Music Awards will include the announcements of the ASCAP Country Music Songwriter of the Year, Song of the Year and Publisher of the Year. The evening is expected to feature live performances of the top five most performed songs by the award-winning songwriters and/or the artists who recorded them. Members of the press can request event credentials by contacting Ronna Rubin at ronna@rubinmedia.biz.

The American Society of Composers, Authors and Publishers (ASCAP) is a professional membership organization of songwriters, composers and music publishers of every kind of music. ASCAP’s mission is to license and promote the music of its members and foreign affiliates, obtain fair compensation for the public performance of their works and to distribute the royalties that it collects based upon those performances. ASCAP members write the world’s best-loved music and ASCAP has pioneered the efficient licensing of that music to hundreds of thousands of enterprises who use it to add value to their business – from bars, restaurants and retail, to radio, TV and cable, to Internet, mobile services and more. The ASCAP license offers an efficient solution for businesses to legally perform ASCAP music while respecting the right of songwriters and composers to be paid fairly. With more than 585,000 members representing more than 10 million copyrighted works, ASCAP is the worldwide leader in performance royalties, service and advocacy for songwriters and composers, and the only American performing rights organization (PRO) owned and governed by its writer and publisher members. Learn more and stay in touch at www.ascap.com, on Twitter and Instagram @ASCAP and on Facebook.