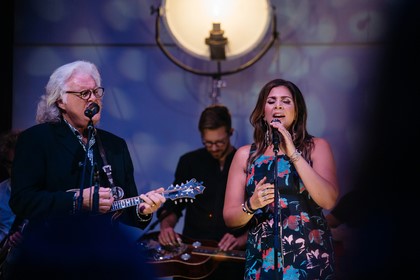 NASHVILLE, TN – July 21, 2016 – Hillary Scott & The Scott Family gathered with over two hundred of their closest friends and family last night (7/20) at Nashville’s The Bell Tower, as they introduced music from their upcoming album LOVE REMAINS (EMI Nashville), available July 29.

The intimate evening maximized the group’s harmonies with newly-written originals such as “Safe Haven” and “Beautiful Messes,” while a surprise performance from coveted producer Ricky Skaggs on a number of songs including “We March On” and “Your Unfailing Love.” Before the evening ended, the Lady Antebellum member Hillary Scott mesmerized the crowd with the record’s sonically stunning first single “Thy Will,” which earned the No. One spot this week on Billboard’s Hot Christian Songs chart.

LOVE REMAINS, a 13-track collection of faith-based songs, is a combination of hymns Hillary grew up singing in church, newly-written originals and songs made popular by other artists. With the help of producer Ricky Skaggs, the forthcoming album blurs the lines between gospel, bluegrass, country and pop. At the center of the mix are the rich, entwined voices of the Scotts, who take turns harmonizing and singing lead. These are songs that find the redemption in struggle, the peace in death, the joy in bonding with family members whenever times are tough. The stories behind the songs are personal, it’s music with a message and Hillary has rarely sounded more at home. LOVE REMAINS follows more than 11 million album sales worldwide for Hillary Scott as one-third of the one of the world’s most popular groups, Lady Antebellum. The trio has earned six PLATINUM singles and dubbed ACM and CMA “Vocal Group of the Year” three years in a row. For more information on new music, a full list of upcoming tour dates and more, visit www.hillaryscott.com.Contact: Tyne Parrish / Elice CuffThe GreenRoom 615-242-7444tyne@thegreenroompr.comelice@thegreenroompr.comAllie BirchfieldUniversal Music Group(615) 524-7583Allie.Birchfield@umusic.com