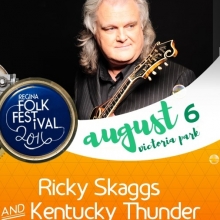 From Regina Leader-Post
by Jeff DeDekker – Published on: May 5, 2016
It was a good news day times two on Thursday for fans of the Regina Folk Festival.
Organizers not only announced that Ricky Skaggs and his band Kentucky Thunder would replace Ry Cooder, who cancelled his appearance on April 27, but also unveiled the individual day lineups for the event. It marked the second consecutive year that the festival had to scramble to replace a headliner — in 2015 Sinead O’Connor cancelled due to exhaustion and unspecified health issues.
It’s only fitting that Skaggs stepped into the void as he was part of the originally scheduled Cooder show, a bluegrass performance that included Skaggs and his wife Sharon White. As much as it was convenient for organizers to slot Skaggs into the lineup given he was initially slated to be in Regina that day, the reality is that the 61-year-old has fashioned a sterling reputation over the past 50 years that’s definitely worthy of a headlining act.
“It’s like they always say, every cloud always has a silver lining and I’m really happy that we could get Ricky Skaggs to bring his band, Kentucky Thunder, to give us one heck of a bluegrass show,” said Sandra Butel, artistic director and CEO of the festival. “I’ve seen them, they’re amazing players. Ricky’s got 14 Grammy Awards to his credit, he’s been playing a wide variety of styles of music for a long time and I’m excited to have him as a replacement.”
Skaggs, who also has eight Country Music Association awards and eight Academy of Country Music awards to his credit, appeared at the 2015 Craven Country Jamboree, but his set was cut short due to a thunderstorm.
The folk festival date will give his fans another opportunity to see Skaggs perform, and that’s something Butel is also looking forward to.
“I’ve been here 18 years and I’ve never booked a big bluegrass extravaganza before,” said Butel. “I’m excited about too, to have some of those sounds in the park. It’s going to be a big party.”