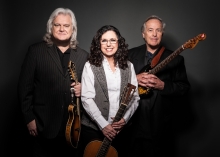 Nashville, Tenn. (May 5, 2015) – World-renowned guitarist Ry Cooder, country music songbird Sharon White and country and bluegrass legend Ricky Skaggs are combining forces for a national road show.
Today, the three music vets announced the “Cooder-White-Skaggs” tour, their maiden voyage as a musical trio.  The tour kicks off  in Salt Lake City this June and will continue with scheduled performances in Denver, Milwaukee, San Francisco, Seattle, Boston, New York City and more.
“Getting to work with Ry Cooder has been a dream of mine for a long time.  He is a world-class musician,” notes Skaggs.  “We met at a GRAMMY Awards show many years ago and thought it would be a blast to do something together sometime, and now we’re getting to create new sounds around old music.  But the best part is getting to share the stage every night with my wife and sweetheart Sharon White.  My heart is full!”
In a most exceptional pairing, master multi-instrumentalists Cooder and Skaggs will come together on stage to deliver a revelatory program of blues, gospel, and bluegrass music.  They will be joined by White, one of the purest voices in country music, Joachim Cooder on drums, and Mark Fain on bass with occasional guest performances by Buck White and Cheryl White of The Whites.
“I always love singing and playing music with Ricky…  he’s just my favorite in every way!” says White.  “And we are both so excited to be doing shows this year with Ry Cooder.  What an incredible artist!  He is truly a ‘one-of-a-kind’ musician!  Ricky and I share Ry’s love for traditional country, bluegrass, and old-time gospel music.  He is passionate about doing music that is authentic and real.  It’s infectious!”
“‘Cooder-White-Skaggs’ is the legacy express, or I’ll eat a bug,” quips Cooder.  “You are going to hear four-part singing from the heart, the finest and best instrumental activity in the land, songs you know and love and to top it off, the indomitable Buck White on piano who will turn your money green.  Now who’s happy?  That’s the way we’re gonna stay so knock on wood!”
“Cooder-White-Skaggs” 2015 Tour Schedule:
June 16 – Salt Lake City, UT – Red Butte Garden
June 17 – Aspen, CO – Belly Up Aspen
June 19 – Boulder, CO – Chautauqua Auditorium
June 21 – Telluride, CO – Telluride Bluegrass Festival
June 22 – Denver, CO – Denver Botanic Gardens
July 17 – Milwaukee, WI – The Pabst Theater
Sept 30 – Saratoga, CA – The Mountain Winery
Oct 2 – San Francisco, CA – Great American Music Hall
Oct 3 – San Francisco, CA – Hardly Strictly Bluegrass Fest
Oct 5 – Arcata, CA – Van Duzer Theatre
Oct 6 – Portland, OR – Aladdin Theater
Oct 7 – Seattle, WA – The Moore Theatre
Nov 10-11 – Alexandria, VA – The Birchmere
Nov 14 – New York City, NY – Carnegie Hall
Nov 17 – Boston, MA – Berklee Performance Center
Nov 18 – Portland, ME – State Theatre
About Ry Cooder
Ry Cooder is a virtuoso roots guitarist who is steeped in the blues but has spent much of his career exploring new musical worlds from Tex-Mex to Cuban bolero.  He has won 6 GRAMMY awards, most recently for Best Traditional Latin Album (2003) and Best Pop Instrumental Album (2003).  In 1997, Ry Cooder traveled to Cuba to produce and play with a group of musicians who had little exposure outside of their homeland.  The resulting album, Buena Vista Social Club, was a platinum-selling international success that made stars of Compay Segundo, Ibrahim Ferrer, and Ruben Gonzalez, and earned Cooder another GRAMMY.  He has collaborated with an incredible variety of artists over the years including Flaco Jiménez, The Chieftains, Ali Farka Toure, John Hassell and Manuel Galban.  Ry has written scores for over 16 major motion pictures for directors for Walter Hill, Mike Nichols, Louie Malle, Tony Richardson and Wim Wenders.  In 2011, City Lights published his critically acclaimed book “Los Angeles Stories.”  Ry Cooder has released 17 solo records since 1970 as well as several compilations.
About Sharon White
As a member of beloved country-gospel family band, The Whites, Sharon White has been making music alongside her father Buck and sister Cheryl for more than 40 years.  Both with The Whites and as a solo artist, Sharon White has won multiple awards, including GRAMMY, CMA and Dove Awards, among others.  The Whites have been esteemed members of the Grand Ole Opry since 1984, and they appear on the world famous Opry stage nearly every weekend.  Sharon White and her family trio became well known for their string of Country hits in the 1980s, including “Hangin’ Around,” “Give Me Back That Old Familiar Feeling,” and “Pins and Needles.”  With the release of Hearts Like Ours (2014), a dream came true for Sharon and her husband, country and bluegrass music legend Ricky Skaggs.  Previously in 1987 the pair won a CMA Vocal Duo of the Year award for “Love Can’t Ever Get Better Than This.”  This first-ever studio album is produced by Skaggs and White and features the couple dueting on handpicked country love songs.
About Ricky Skaggs
Over the course of his 40 plus year career, Ricky Skaggs has won 14 GRAMMY Awards, 8 CMA Awards, 9 ACM Awards, 11 IBMA (International Bluegrass Music Assn.) Awards, 9 ICM Awards, 2 Dove Awards, 3 honorary Doctorate degrees and countless other awards.  Ricky has had 12 #1 singles on the Billboard Country charts and 12 Top 20 Country albums, along with twelve consecutive GRAMMY-nominated albums, all from his own Skaggs Family Records label.  In 2012, Ricky Skaggs was inducted into the GMA’s Gospel Music Hall of Fame.  Past recipients of this prestigious award include Elvis Presley and Dolly Parton.  That same year, Ricky received the Cliffie Stone Pioneer Award from the Academy of Country Music (ACM).  In 2013, Grand Ole Opry member Ricky Skaggs released his first-ever autobiography, “Kentucky Traveler: My Life In Music.”  The book details the life and times of Skaggs and provides a descriptive history of Country and Bluegrass music, as told by the master himself.