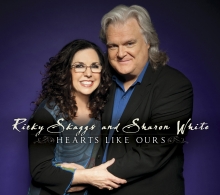 At the Grand Ole Opry on Friday, Oct. 24, Ricky Skaggs & Sharon White will be performing selected songs from their new duets CD, Hearts Like Ours with Ricky’s band, Kentucky Thunder.  Both Skaggs & White will sign copies of their first new album together in the Opry Shop immediately following the Opry show, scheduled for approximately 9:15 pm.  Come join the fun at the Opry that night!  Click HERE for tickets to the show and click HERE for more information about the show.

With 12 #1 hit singles, 14 GRAMMY® Awards, eleven IBMA Awards, eight ACM Awards and eight CMA Awards (including Entertainer of the Year), Ricky Skaggs is truly a pioneer of Bluegrass and Country music.  Since he began playing music more than 50 years ago, Skaggs has released more than 30 albums and has performed thousands of live shows.  Skaggs and his band, Kentucky Thunder, continue to keep the tour trail red hot, performing more than 80 live dates each year.  He started his own record label, Skaggs Family Records, in 1997 and has since released 12 consecutive GRAMMY®-nominated albums.  Last year, the Grand Ole Opry member released his first-ever autobiography, “Kentucky Traveler.”  The book details the life and times of Skaggs and provides a descriptive history of Country and Bluegrass music, as told by the master himself.

Sharon White is a member of beloved country-gospel family band, The Whites, and has been making music alongside her father Buck and sister Cheryl for more than four decades.  They originally began as a Bluegrass group, but the family trio became well known for their string of Country hits in the 1980s, including “Hangin’ Around,” “Give Me Back That Old Familiar Feeling,” and “Pins and Needles.” The Whites are Grand Ole Opry members and combine a respect for – and mastery of – traditional country and bluegrass with a refreshing style in each of their performances.  They were involved in the 2001 hit movie and soundtrack, O Brother, Where Art Thou?, and have gone on to win multiple awards, including GRAMMY®, CMA and Dove Awards, among others.