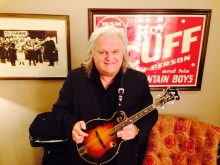 CONGRATS, Ricky Skaggs! This photo was taken as Ricky celebrated his 32nd year anniversary on May 15 as a Grand Ole Opry member.  He was the Spotlight Artist for the Opry Country Classics show that night held at the one and only Ryman Auditorium – the very stage where the bluegrass genre was born when Earl Scruggs played his then-revolutionary style of banjo with Bill Monroe and his Bluegrass Boys for the first time in 1945.