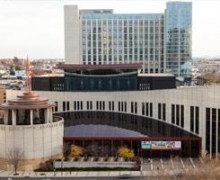 The Country Music Hall of Fame® and Museum will officially reveal the final phase of its state-of-the-art expansion on Tuesday, April 15, at 1:15 p.m. with the opening of an additional 10,000 square feet of dynamic new exhibit space.  The grand opening ceremony is supported by Ford Motor Company and the Middle Tennessee Ford Dealers.

Open to the public, the grand opening celebration will take place on an outdoor stage at the corner of Demonbreun and 5th Avenue South in Nashville, and will feature performances by Ricky Skaggs, Vince Gill, Lee Ann Womack, Buddy Miller and more, along with appearances by dignitaries including Nashville Mayor Karl Dean and other special guests.
The debuting exhibits comprise the joint ACM Gallery and Dinah and Fred Gretsch Family Gallery, featuring an interactive, hands-on immersion into the country music of today, and the Design Gallery: A Window into the Collection, which allows a behind-the-scenes view of museum staff hard at work on actual archival projects.
The ambitious 210,000-square-foot expansion more than doubles the size of the museum and augments the institution’s ability to focus on its core mission to preserve, interpret and teach the history of country music and related vernacular music rooted in Southern culture.
Previously unveiled sections of the expansion include new education, entertainment, retail and event spaces, including the 800-seat CMA Theater, the Taylor Swift Education Center, the legendary and thriving letterpress operation Hatch Show Print and the Event Hall overlooking the Nashville skyline. The expansion also includes much needed archive and library spaces, allowing for even more robust cultivation of the museum’s treasured collection.
“This expansion is a major milestone for the Country Music Hall of Fame and Museum,” says Kyle Young, Museum Director. “It also embodies the exciting momentum shaping Nashville today, especially downtown. All of us at the museum are so proud to help lead the current growth that is defining one of the country’s most culturally significant regions.”
As a result of its pioneering 2001 downtown relocation, the museum now sits at the epicenter of Nashville’s rapidly growing core. Accredited by the American Alliance of Museums since 1987, the museum has been assembling its two-million-item collection since 1967. Using its unrivaled collection and expertise, the museum seeks to engage visitors in the breadth and depth of country music’s evolving story, in the context of local and national history.
The educational programs of the Country Music Hall of Fame® and Museum, Hatch Show Print, and Historic RCA Studio B are funded in part by grants from the Tennessee Arts Commission and the Metropolitan Nashville Arts Commission, through an agreement with the Tennessee Arts Commission and the National Endowment for the Arts.