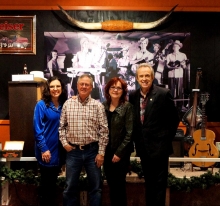 Celebrated family band The Whites – consisting of father Buck and sisters Sharon and Cheryl – were honored with the designation of having their own “The Whites Day” proclaimed by the mayor of Wichita Falls, Texas on January 2, 2014.  They were presented the certificate during their stop to see “The Golden Age of the Honky-Tonk” exhibit at the Museum of North Texas History.  In honor of their visit, the day was officially “The Whites Day” in Wichita Falls.

The GRAMMY, CMA and Dove Award winners road to country music stardom started in Wichita Falls, as Buck White played with several country and western bands. As they grew to become a family band, they moved to Arkansas and finally to Nashville in pursuit of their dream to play country music.  The Whites sound is influenced by all the music played in those areas, with country/western, Texas swing and bluegrass thrown in the mix to create their own brand of music “with a little swingy beat” according to Sharon White Skaggs.

Congratulations to The Whites!