A Rave Review of ‘Music To My Ears’ 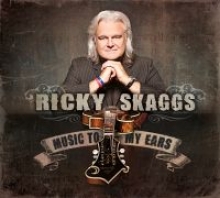 Doing things his own way has worked well for Ricky Skaggs. From Waitin’ On The Sun To Shine on, he has produced his records – and seeing how many of those discs would place pretty high on any “100 All-Time Greatest Country Albums” list that I would write, I can’t argue with the results.
On his last album, however, Skaggs changed things up a bit – collaborating with Gordon Kennedy on the triumphant Mosaic. Though hard to define from a style standpoint, the disc stands as the favorite of many a Skaggs fan, and Kennedy’s contributions can not be overlooked.
Kennedy is back on Skaggs’s new disc, serving as “Co-producer.” I’ve got to say that since his entry back into Bluegrass, 1997’s Bluegrass Rules, this might very well be his best album. Actually, this is on par with his best 80s work, as well. While it is Bluegrass, there are a few twists along the way.
“Music To My Ears” is not your basic Bluegrass / Gospel song, nor would it sound at home on his previous disc, but it is a gorgeous piece of music that Skaggs delivers flawlessly. “Blue Night” sounds like a Bluegrass song of old, which he and Kentucky Thunder hammer out of the ballpark. “Tennessee Stud,” a tribute to Doc Watson, works well, as does the Stanley Brothers classic “Loving You Too Well.” Barry Gibb – yes, that Barry Gibb contributes the moving “Soldier’s Son,” which is a gem, and the instrumental “New Jerusalem” gives everyone in the band a chance to shine.
But, the star of the show is Skaggs, and he is at his best on a pair of cuts that are very opposite to each other. “What You Are Waiting For” is a beauty of a cut. Skaggs Family needs to look at putting this track out as a single. Co-written by Kennedy, this song is one of the best he has recorded in a long time. The arrangement is unique, as it is the most “Country” Skaggs has sounded in quite some time. On the other end of the spectrum is the Bill Monroe – inspired “You Can’t Hurt Ham.” Skaggs gets a chance to show his humorous side, as he weaves a story about one of the culinary addictions of one William Smith Monroe. It’s not somber or reverential – as is most tributes to the “Father of Bluegrass,’ and that’s the magic. It sounds like he is having a blast here.
Ricky Skaggs is one of American music’s treasures, and he proves it once again on this riveting piece of work. Again, it’s one of his best ever albums, and that my friends, says a lot!
For more information, log on to www.SkaggsFamilyRecords.com