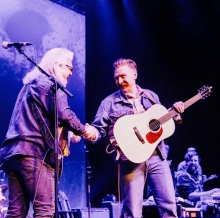 Skaggs originally released “Highway 40 Blues” in 1982, on his “Highways & Heartaches” album. Written by Cordle, it topped the country radio charts in 1983.

The song comes as one of two Spotify Session tracks from Childers, joining a ripping bluegrass rendition of 2019 original “House Fire,” featuring The Travelin’ McCourys.

And it isn’t the first taste of “Highway 40 Blues” from Skaggs and Childers. The two performed the song together at the Ryman Auditorium earlier this year, part of Childers’ sold-out four night residency at the Mother Church of Country Music (Not bad for someone who once compared scoring a Skaggs autograph as a five-year-old to “meeting Babe Ruth.”).

The pair covered a handful of songs together during the February show, including Bobby Charles’ “Tennessee Blues” and “Blue Eyes Cryin’ In The Rain,” made famous by Willie Nelson.

In an interview earlier this year with The Tennessean, Skaggs called it an “amazing” experience.

“I’d been watching him a little bit before I came out and I was just so shocked at how everybody in the crowd was singing his songs, they knew words to every song he did,” Skaggs said. “It’s one thing to sing along to … whatever we did of Willie’s. It’s something else for people to listen to a new artist, a young kid, and know the lyrics to his songs.”

Skaggs continued, “He’s got a voice of the mountains. He ain’t trying to be anybody else. He’s got something going on.”

Childers’ latest LP, “Country Squire,” debuted at No. 1 on the Billboard Top Country Albums chart — one in a growing lit of benchmarks for a traditional country storyteller who in the last year scored a Grammy Award nomination, sold out gigs globally and earned his name next to Skaggs and Cordle on the “Country Music Highway” in Kentucky.

Listeners can find the new renditions of “Highway 40 Blues” and “House Fire” exclusively via Spotify.